Vape Hysteria - A Reflection Into EVALI 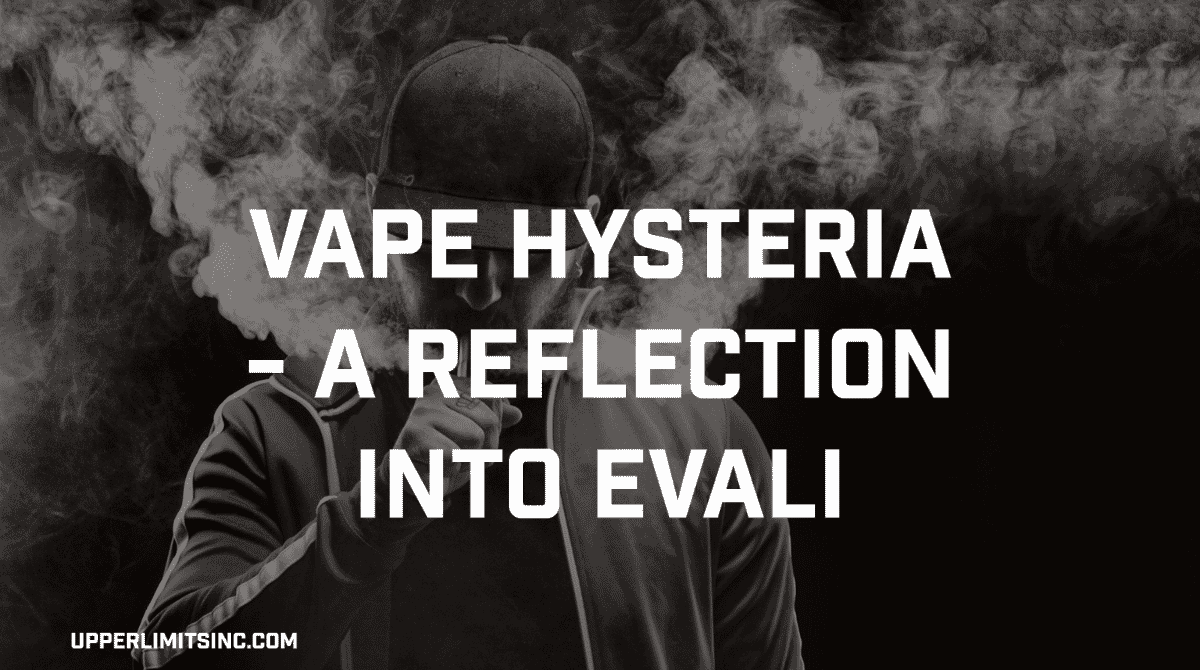 Harm Reduction and Hysteria - A Reflection Into EVALI

lethal respiratory illness being vaguely linked to the use of vaporizers. As unfortunate patients in both Illinois and Wisconsin fell ill and

subsequently died, the CDC seized the moment and quickly deemed “vaping” as the culprit due to the only external commonality between the

patients being the use of vaporizers. Dubbing the mysterious illness as EVALI (E-cigarette or Vaping Associated Lung Injury) the CDC warned

of the dangers of using electronic vaporizers of all forms and functions. While the number of those falling ill increased, and the area of effect

widened, little to no information was shared by officials regarding the type of vaporizers being used nor what substances were being

vaporized within those devices, culminating in the perfect storm of fear-driven hysteria. This fear has understandably caused many to

abandon electronic nicotine delivery systems (hereafter referred to as ENDS) in favor of traditional analog cigarettes, undoing much of the

progress made by those using ENDS to quit their habit of cigarette smoking.


How could something that’s marketed as a healthier alternative to cigarette smoking be causing the acute respiratory failure? It’s a story all

outright lying about the effects of their products. Is this an instance of the history of corporate greed repeating itself, or of misguidance and

misinformation quickly spreading through social and legacy media due to an intentionally vague CDC and FDA?

traditional combustible cigarettes. ENDS or nicotine vaporizers, as they are also referred to, work by heating water-soluble glycerin containing

nicotine and USP food-grade flavoring (e-liquid) to a temperature just above its boiling point. This creates an aerosolized cloud of flavored

nicotine while avoiding the extreme temperatures and rampant chemical changes caused by the combustion of paper and tobacco. In doing so

many of the largest chemical contributors to smoking-related illness are greatly reduced if not eliminated. A study conducted in 2015 by the

U.K.’s Royal College of Physicians, the same body of medical doctors who published a landmark report on the dangers of smoking tobacco in

1962, reported that “e-cigarette use is unlikely to exceed %5 of the harm from smoking tobacco.”


At face value, such a study seems to suggest that using electronic nicotine delivery systems containing properly manufactured e-liquid is

likely %95 safer than traditional combustible cigarettes. If this is the case, how are so many falling ill from nicotine vaping through the use of

ENDS after such a short time of exposure? How are vapers turning into hospital patients presenting with Lipoid Pneumonia-like symptoms (an

illness caused by the inhalation of non-water soluble, fat resembling oils)?. This is especially odd considering that no lipoid oils are listed as

ingredients by any FDA-compliant nicotine E-Liquid manufacturers. The simple answer; these patients are not falling ill from nicotine vaping,

but from vaping a substance entirely different.


After months of autopsies and the testing of products being used by those who fell ill, the CDC has finally announced that they have found

viscous liquid that is a synthetic petroleum-based form of the naturally occurring vitamin E. Further information on the CDC’s announcement

can be found just below.


“ Analyses of bronchoalveolar lavage (BAL) fluid samples (fluid samples collected from the lungs) of patients with an e-cigarette, or vaping,

CDC laboratory test results of BAL fluid samples from 29 patients submitted to CDC from 10 states found vitamin E acetate in all of the samples.

CDC tested for a range of other chemicals that might be found in an e-cigarette, or vaping, products, including plant oils, petroleum distillates

like mineral oil, MCT oil, and terpenes (which are compounds found in or added to THC products). None of these chemicals of concern were


This is the first time that we have detected a chemical of concern in biological samples from patients with these lung injuries. These findings

provide direct evidence of vitamin E acetate at the primary site of injury within the lungs."


the water vapor naturally found in the lungs. Once the lungs are internally coated in vitamin E acetate the free exchange of oxygen and

carbon dioxide can no longer take place. This forces physicians to intubate with breathing machines and/or have medical devices remove,

oxygenate, then replace their patient's blood in hopes of maintaining healthy blood oxygen levels until the chemical is removed enough for

the patient to begin breathing autonomously. I reiterate, that no FDA-compliant nicotine e-liquid manufacturers list vitamin E acetate as an

ingredient in their product.


While the avoidable deaths of fellow humans are always saddening and disappointing, so is the wanton disregard for public health displayed

by the CDC through how the situation was handled. Early on it was suggested by vaping advocates and various health officials that something

other than nicotine e-liquid could be to blame for the outbreak due to the fact that throughout 12 years of widespread ENDS use, no lipoid

pneumonia-like illnesses had been recorded due to nicotine vaping alone. Yet still, the CDC chose to be intentionally vague while hiding

behind the guise of public safety. How many people who incorrectly took the CDC’s warning as a warning specifically regarding ENDS

continued to buy and use these tainted THC cartridges? How many ex-smokers unwillingly went back to traditional combustible cigarettes due

to being misled? Every day the number of people falling ill, or returning to cigarettes continues to rise, in no small part to the mishandling of

custom glass blowing cbd oil what is delta 8 Best CBD For Skin Care
Compare Products
Compare
Clear All
You have no items to compare.
My Wish List
Last Added Items
Go to Wish List
You have no items in your wish list.
Email address is required to login
© 2022 Upper Limits Midwest Inc. All Rights Reserved.